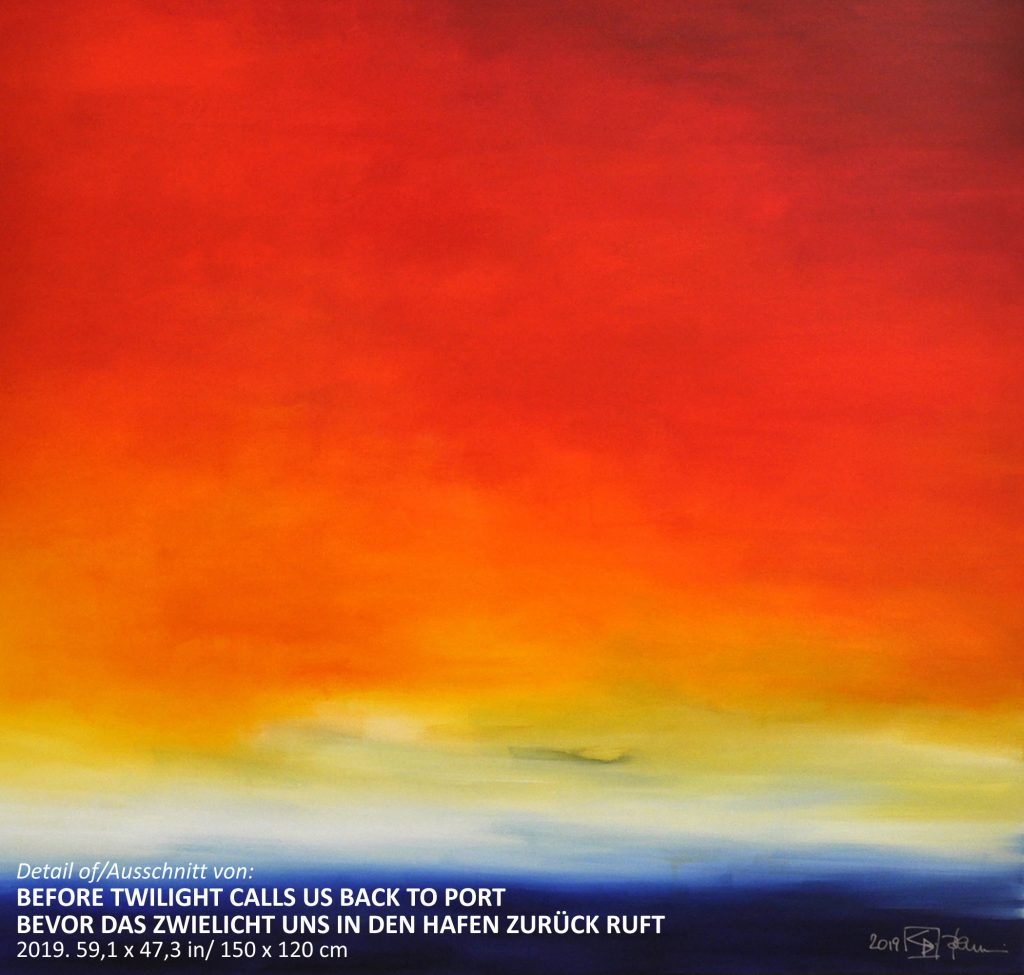 We live in a visual world. Photographic products dominate us and redefine reality. I would like to oppose this dominance of the photo with the painter’s means. For several years I have been working on a project entitled PHOTO VERSUS PAINTING, which deals with photography and its connection to painting. The following text reflects the current concept.

STARTING POINT: THE PHOTO AND ITS TODAY’S VALUE

The photo is considered objective. Nowadays, the photo (apart from the medium of film) has a claim to power, as far as the proof of reality is concerned. Photography as a light box of truth, as a documentation of the contemporary. What does not find in photos, does not exist, not only in the public perception, but it does not exist at all. Conversely, every photo is self-defined and used in the media as genuine, real, true and as a nature-identical image. This results in a social, social and political claim.

But the photo is not objective. Picture motive and selection are solely subject to the decision of the photographer, his intuition, his intention and his craft-artistic skill. And it is not the reality depicted, but one of many, equal ranking, just that of the respective photographer. Thus, the photo can have no objectivity. Why do we look at a photo with different eyes than we do with a painted picture? Why is the motive for a photo more important to us than the creative ability, while we usually approach paintings in the reverse order (first the ability, the creative expression, then the motive)? The project PHOTO VS. PAINTING wants to discuss these issues by contrasting and combining photo and painting.

CONCLUSIONS: GOALS OF THE PROJECT

By means of painting, a demasking of the photograph as an instrument of objective representation, a disclosure of the seemingly real, is to take place. Obvious is the ubiquitous arbitrariness in colors and shapes, the portrayal of superficiality as content as well as of contents that remain in superficiality so that they do not get under the skin, do not hurt. For if the photo is questioned in its claim to absoluteness (not in its starting point), then one also logically questions the present-day depiction of the real in public and private space. This question is important because there is more than one truth. Or to put it another way: are there any truths?

All this does not need a measurable goal nor can it prove it. But the finale in the expressiveness of the picture / photo has vanished. It begins to flow again, becomes freely malleable, becomes emotional and deeply subjective. There are no limits except those of one’s own optical perception, in which nothing is absolute, no longer frozen and served by the eyes of a nature-identical lens. So everything is possible again. There are no stagings, no laws of nature other than ones that it would be worth paying attention to. And finally, the picture is no longer corruptible, because it has lost its usefulness as mass manipulation. There is nothing more.

Of course, painting can not and should not form an alternative to the photograph. Painting is never universally valid, it is just as subjective and only for the individual a part of its own reality. It is no better than the photo itself, not innocent, and certainly not objective and honest. And so painting does not release from the responsibility of the individual to substitute for the place of an ineffectual copy of reality (photo as well as canvas) a very personal, down to the personal interpretation. And this finding process will fail if it is only mentally, rationally guided with itself. It takes the physical in its entirety to find ground again under the feet. It requires that power which draws from the anarchic, which knows no goal. Only then does it seem immediate, without distance. The image as a picture, not as a mediator or broker. It is therefore almost inevitable that there are nude motifs, both for the photographic starting point and for a painterly realization. The naked, the immediate is manifest as (apparently) unmanipulated and free of subjective influence. And yet hardly any area (in photography as well as in painting) is subject to such a strong urge for subjective intervention by the artist. Here also the circle closes to my graphic works and body studies.

The creative framework in which the project is to move artistically requires the definition, as it were, of a set of rules. This is not yet fully defined and currently consists of the following preliminary approaches and considerations:

1. The source, the starting product, the photograph, must remain independent and, at least in some of the process stages, also recognizable as such.

2. Photographs and paintings must have a thematic relation to each other and – visually – can coexist; The points of reference and connection should open up to the viewer without any great explanations. This includes the color scheme.

3. The project process from the photo to the painting has to be documented in a documentary way and depict the alienation of the photographic motif to trace the return to their own perception of reality. Consequently, the photo is also part of the content of the painting process.

4. Despite all reduction, the image on the canvas itself must carry meaning and beauty (better: a subjective concept of beauty). The reduction alone can not be justification enough for the painting. The painting also has to look like a painting without the photo.

5. Further questions: What about interactive elements that seemingly or actually cancel the two-dimensional reduction? Is this a creative interaction with the motif itself, the influence of the model on the degree and direction of painting useful or even necessary? Does this increase the degree of subjectivity or does it rather lead to an objectification that reduces the individual?

Updated / to be continued…